Brian_B said:
You know, I don't think any of the cars I've owned have coolant level sensors. They all have had coolant temperature sensors though - which I admit doesn't work exactly the same way, as I can think of some ways that an engine could destroy itself where a coolant temp sensor wouldn't indicate anything is wrong (if it were run dry, for example - but you'd have to almost try to get an engine in that state).
Click to expand...

As cars age, the likelihood of leaking coolant goes up. Dried cracked hoses have always been a problem, but in cars made in the last 30 or so years, all the reservoirs are plastic and could crack as well.

Coolant level sensors are a very good thing to have. It saved my butt once. Big warning triangle light in dash instructing me to pull over immediately or risk engine damage. That was on my 2009 S80 though, when a repair shop dislodged a coolant hose.

The thing is, car manufacturers don't really care as long as the car makes it through the warranty period. After that it is on you. That's why we se so much **** these days, like 10k mile recommended oil change intervals (no, synthetic oil is not "good enough" to protect your engine for 10k miles) and so called "sealed" automatic transmissions without a dipstick or convenient ports to replace or flush the transmission fluid. There is no such thing as a "lifetime transmission fluid".

I mean, sure, if people expect to buy new cars and dispose of them after 5-10 years this is fine, but if not these types of things are really bad ideas.

I'll also try to figure out how to flush the transmission despite it being "sealed" by ~80k miles as is best practice, even through the manual has no recommended maintenance interval for transmission fluid.

Not doing so is foolish if you want your car to last.

Zarathustra said:
Coolant level sensors are a very good thing to have. It saved my butt once. Big warning triangle light in dash instructing me to pull over immediately or risk engine damage. That was on my 2009 S80 though, when a repair shop dislodged a coolant hose.
Click to expand...

This is true, I don't deny it. But in my experience, even if you do develop a leak or a burst hose - the temp sensor can usually catch it in time (assuming you don't just see the huge cloud of steam pouring out your hood). Even if you cut the hose in half and let the water pump pump all the coolant out, the coolant temp is in an elbow or drop down in the block someplace, so it ~shouldn't~ get to a point where it won't throw a code or alarm before engine damage occurs -- assuming you pay attention to the alarm and actually stop and check it out.

But your right, most cars are designed to last the warranty period, and not really anything beyond that. I usually try to keep my cars around 10 years, or under 200k miles. By that point stuff is starting to wear out that gets pricey to correct -- stuff that has no easy maintenance recourse. As you say, sealed transmissions are a big one now. Fuel filters being integral to fuel tanks. Interior upholstery wearing, etc. The big one where I live are rodents that love to eat wiring harnesses, so cars start to develop a personality over time...

I've always pictured volvo as ugly cheap looking cars. And they weren't that cheap to begin with.

Today, they are no longer cheap but still lag competition aesthetics wise.

Riccochet said:
So you have a base model V70. There were many flavors of it that put it straight in the luxury category at the time. Even the sport luxury category like the V70R.
Click to expand...

Agreed. Luxury models existed, but these were not the volume sellers. They were a tiny minority of the sales totals. Over time it may not seem like it, as they have - of course - been more popular, so they are more likely to have been maintained and kept on the road, where less desirable models have been allowed to be put out to pasture, but in their original production years they were a distinct minority.

Back then, the base model was the basis, and then they made a few higher end models.

Now the luxury model IS the base model. There is no more utilitarian Volvo.

Stoly said:
I've always pictured volvo as ugly cheap looking cars. And they weren't that cheap to begin with.

Today, they are no longer cheap but still lag competition aesthetics wise.
Click to expand...

It really depends on your tastes. I love the old school minimalist designs.

My new S90 is a bit too racy for my tastes. I almost feel awkward driving it around. 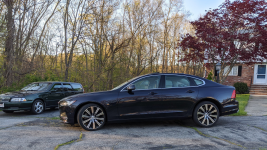 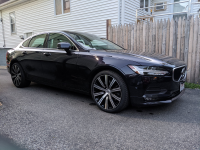 I didn't like the older boxy designs at all. But the recent Volvos I'm on board with - they have a subdued Jaguar style to them.

For cars for my own personal use, if I ever had to replace my work truck, Volvo is on the short list. I am moderately interested in the "Care by Volvo" leasing program - since it includes all maintenance and insurance. I normally wouldn't consider a lease at all, but that one I would.
You must log in or register to reply here.
Share:
Facebook Twitter Reddit WhatsApp Email Share Link
Become a Patron!
Top