Saw this thing on Newegg, on sale for $129. Reminds me a little of that open concept Antec case from years ago. Anyway, this thing is pretty funky looking, but it's got ALL the fans! Maybe you guys can buy one and review it? 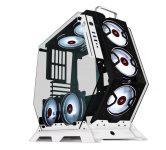 Sorry that is too many fans. And I think it was the antec... skeleton?

Yea it was the skeleton though it was more a pseudo test bench and more a "portable" pc case.

Grimlakin said:
Sorry that is too many fans. And I think it was the antec... skeleton?

Yea it was the skeleton though it was more a pseudo test bench and more a "portable" pc case.
Click to expand...

It's not. I have more than that in mine.

Burticus said:
but it's got ALL the fans!
Click to expand...

It's not how many fans you have, it's how you use them

LazyGamer said:
It's not how many fans you have, it's how you use them
Click to expand...

That thing could be cooled by.... onlyfans.

Grimlakin said:
That thing could be cooled by.... onlyfans.
Click to expand...

You beat me to it. This case brought to you by OnlyFans

Dan_D said:
It's not. I have more than that in mine.
Click to expand...

I'm at ten in a Lian Li O11-D XL (same case as Dan). That's with just two 360mm radiators in a custom loop, with room for a third, and with no push-pull setups that I could certainly squeeze in, which could add another three or six fans.

Though personally, I'm leaning toward having an open case and using a large external radiator. What I have is working absolutely splendid and the only real advantage to going external would be to be able to use fewer fans, such as a 4x array of Noctua 200mm NF-A20 fans on one of Watercool's MO-RA 420 units.

But most of that is kind of silly without going direct-die on the CPU (applies to AMD and Intel now). Current CPUs just fall off quickly when they hit the end of their efficient voltage / frequency curve, where every additional 100MHz costs significant amounts of power and cooling to pull off.


@Burticus: main reason I wouldn't want to review the case - though I certainly could - is that it is a design that mounts fans on panels that are set away from the case, with large gaps between the panels and the motherboard tray. This means that while they can move air around, they're not doing it efficiently, and unless they have a radiator attached, aren't really contributing directly to heat removal. They'd essentially all just be pushing air around and the core components would be left to cool themselves.

I could see using an AIO, but being limited to just 240mm radiators means that you'd still be pretty limited in terms of cooling in a fairly large case. You could instead do a custom loop, but man, while that could certainly look interesting, and it'd probably perform pretty well, the amount of work to get it going let alone Instagram-worthy would be intense. Not to mention to cost; you'd need many smaller radiators and a bucketful of fittings, and along with better fans (probably be quiet! Light Wings), the cost of the custom loop would likely eclipse the cost of even moderately prudent components.

And that's just cost and performance. I see a lot of safety issues, with sharp edges and what appears to be just a single handle, which along with the relatively unknown manufacturer, well, that'd keep me from ever recommending the case even if it had no other problems.


That all said, I'm certainly personally interested in unique cases, which I believe was the purpose of your post. My review of the Motif Monument from Yuel Beast was fueled by my own curiosity. We're definitely keeping our eyes and ears open around here!

I topped at 13 on my modded HAF X, not including GPU/PSU/CPU. I don't remember their sizes or RPM/CFM specs.
Top - 2 (exhaust)
Front - 2 (intake and controlled via fan controller) - I used ties to mount a fan behind the mesh intended for optical drives. It fit perfectly behind the three of them.
Side - 4 (intake controlled via fan controller) - also I took the side panel from my old HAF 932 because it had mounts for 4 fans.
Rear - 5 (exhaust and 4 were these small fans that came with a Ram cooling shroud from G.Skill, which I was able to mount in the mesh above the PSU to exhaust air from the GPU heatsink)

I have 3 case fans and it is more than enough.

MadMummy76 said:
I have 3 case fans and it is more than enough.
Click to expand...