This as the title says is a subthread for various SSD benchmarks. It doesn't matter if its Gen3, 4, or 5, and whatever comes after, so feel free to post your results here. A number of us are currently focusing on the 4KRND metrics as those could have a more meaningful impact on gaming.

Here's some data from my rig. This first post will be my NVMe drive: Sabrent Rocket 4 on PCI 4 slot (Asus B550 platform)

First - I think it's somewhat important to post some concrete drive data. I picked a random program (HDDScan) so it can show actual model number and FW revisions. There's probably a better tool for this, but I think this shows the relevant data. 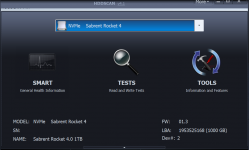 This is with my normal third-party cache enabled (PrimoCache) 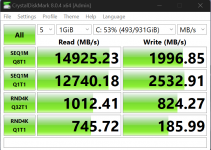 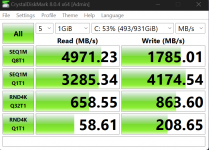 I should have done that second run w/o cache after a fresh reboot, not sure if it would affect the numbers, but didn't think about it until after it was almost done.
Last edited: Jan 12, 2023 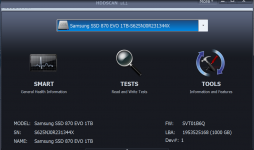 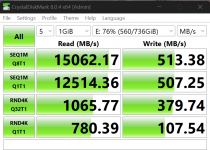 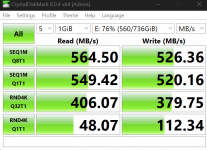 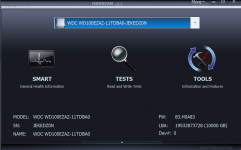 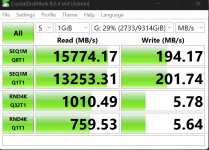 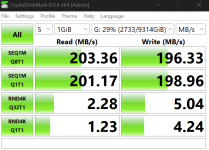 Cache is effective, as long as you are just caring about Read (which, as a typical gamer/consumer, is 90% of what I do), and what you are doing can fit inside the cache. There is an option to enable write caching, but I do not use it as I fear about data loss situations, and I don't do a lot of writes the disk anyway.

The cache effectively makes it so Read is just testing the RAM cache moreso than the drive -- there's probably a way to tweak the test to account for that and run the cache out, but I'm just using out-of-the-box settings on CrystalDisk, and that's why I did the second run with the cache disabled so you can see the drive on it's own. Kind of neat seeing a platter drive come in about the same as a PCI 4 NMVe, but I do realize that it isn't actually hitting the drive, it's just the cache.

In real world use, I can say: if I play a game from the spinner; the first time it will be sluggish. Times after that, much better. Not quite as good as SSD - as the cache isn't 100% effective in all cases, but pretty darn close. I was surprised that it was even effectively caching the PCI 4 drive with some good effect.

Other than that, with the cache disabled the drives should more or less come in similarly to the same drives on other platforms - I don't think there are any surprises.

Here's a quick run for my Crucial P5 Plus m.2 PCIe 4.0 2TB that is on a Gen4 slot. I got this on sale sometime last summer for just under $200 and I'm pretty happy with it. Not the fastest but not horrible either. 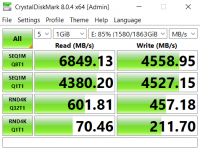 and here are the scores for the Sabrent m.2 1 TB drive. It is a Gen4 drive but in a Gen3 slot. I do find it interesting in how its 4K scores traded blows with the Gen4 slot and was even faster on one test. 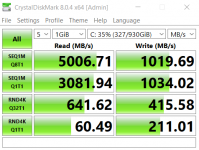 So if we're going to build a system to do m.2 nvme testing... what motherboard offers the most m.2 slots at the highest pcie rating?

I'm thinking a server board that supports nvme blades that can house stand alone m.2 drives. Issue would be cooler heights for drives that come with a heat sink.