I have no idea how long this sale will last but I know it's hard to find something basic this size at a reasonable price. The only complaints I read in the reviews were that some of the measurements of the parts were off but still doable. When I get home I'm going to check to see if I can fit it in a spot where I patched together various parts for WFH a couple of years back because I'd like to simplify and this looks like it could do the job.

Hey, where I live, throw a few splotches of paint here and there on it, get cozy with a gallery owner, and it'd sell for at least that.

Well, that didn't last long. I thought better of it and actually ordered this as I was posting this thread yesterday. I just checked my emails and they voided the order last night, out of stock. Oh well. This is one of those backburner projects anyway.

Some slightly better news. I found the same desk on Amazon for $30 more. Since that's still a reasonable price for me I went ahead and ordered it. It should be here today.

I used butcher blocks from Ikea on top of bookshelf ends and made my own groovy L desk for relatively cheap.

Burticus said:
I used butcher blocks from Ikea on top of bookshelf ends and made my own groovy L desk for relatively cheap.
Click to expand...

The desk that this is replacing is hacked together from multiple pieces.
1. A computer desk I bought around 10+ years that at one point housed my old P4 build. It's one of those that has a side spot/shelf for a tower and then has a raised section for a monitor or printer.
2. A black piece of board that came from an old entertainment center that I had so long ago I can't even remember what it look like originally.
3. A rolling laptop table I'd got about 5-10 years for an old Sony VAIO I ended up giving my dad a while back.

I mounted the piece of the black board onto the side of the desk and then onto the top of the laptop table to make a kind of U shape. It's worked in giving me the space I needed but obviously was more convoluted than desired. When WFH started I had revived my old 2600K rig(there are pics somewhere on this site that I posted). I put a monitor and a pair of speakers along with a printer on it and had just enough room for the K&M and some paperwork items. Then, last summer I treated myself to a new laptop and 21:9 monitor and retired the 2600K rig for good. 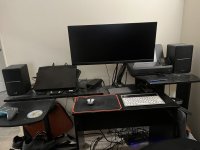 The desk should be delivered sometime tomorrow. Once I have it assembled and have taken down all the old stuff and moved it over I'll take some new pics. I'm really looking forward to the simplified setup. Needless to say, I'm looking forward to the rewards of cable management along with improved ergonomics. This setup has always been the spare-parts rig but I'm glad it's getting a new life now.

Coincidentally, I just checked this morning and showed the wife, the length of this desk is an exact match for the thing it's replacing. I had taken measurements during the holidays when I had some gift cards I was hoping to put towards this project but couldn't find anything I thought was worth it. Since then I kind of forgot the measurements but when I saw 62" in the listing something must've clicked.

That desk needs a upgrade - the shoes look like the only thing holding it together.

I have the exact same speakers tho ~~

Brian_B said:
That desk needs a upgrade - the shoes look like the only thing holding it together.
Click to expand...

Yep. It was never intended to be. I originally thought that once wfh ended I'd finally get rid of it but then I realized I liked having a rig there.

Clothes and furniture are often at the bottom of my priorities. Not always the wisest choice but, oh well. Keeping the wife happy, house and cars maintained, and then my toys are at the top. oh, and good beer+scotch.


Brian_B said:
I have the exact same speakers tho ~~
Click to expand...

I got the speakers(Edifiers) on Amazon for around $160-$180. I absolutely love them. Such amazing sound.

My only complaint with the new laptop is that it doesn't have an optical out and I really miss that. The old rig did and I used to really enjoy listening to hi-res music on it. Still sounds good via BT though. I can't remember but I think I've been able to stream 24/44.1 or maybe 24/48. I know my tablet can stream to it @24/48. There's a small chance I might eventually get a USB soundcard for it but that's on the fence. I'm far more interested in a better cooling solution for the laptop though.

Whats up with that funky keyboard, Peter?

And yeah, take that thing out into the alley and set it on fire. Viking funeral!

Peter_Brosdahl said:
Clothes and furniture are often at the bottom of my priorities. Not always the wisest choice but, oh well. Keeping the wife happy, house and cars maintained, and then my toys are at the top. oh, and good beer+scotch.
Click to expand...

I hear ya on that one.

Not long after I bought my first house, I got some advice from one of my neighbors. He was an old ranch hand - he told me that no matter how insignificant a thing you are looking at getting, if you are spending money on it, it's worth it to get the best you can. You may sigh at spending the money at the time, but you won't regret it down the road.

And he was right. I stopped buying cheap cloths, cheap furniture, cheap kitchen tools, etc. A lot of that stuff I'd just get the cheapest thing I could find and call it good enough, because who needs a $30 pancake flipper really? But, as I started doing that, I found the stuff lasts way longer, and probably far beyond the benefit of that - I don't have to fight with the stuff constantly struggling against it or trying to fix it.

Now, I'm not using cheap to just mean money - just because something is expensive doesn't mean it's well built - I use the word cheap as opposed to "high quality". I tend to do a lot more research before I buy something - just recently it was an olive oil sprayer... When we moved into this house about 3 years ago, we needed a new dining room table, wife found a nice solid oak table on the local for sale ads. We go to look at it, it needed a bit of hardware tightened, but the elderly lady said she and her husband bought it when they got married, he had died a few years ago and she was to the point where she was moving closer to the grandkids. The table was bought in 1961, Still looked almost new. I think with a bit of wood polish we could probably keep the thing until we retire and downsize as well.

More to the point of the story - for our second or third wedding anniversary, I can't recall which, I got my wife and I a hardwood desk / cabinet set for the home office. It wraps around 3 walls - has plenty of cabinets and file storage and the like. The stuff going on 10 years, survived a move with no issue, and with any luck will outlast me like that oak dining table and get passed on to the kid or sold to some other lucky couple I imagine. It wasn't cheap - not $10k fortunately, but a good deal more than Ikea would have run.
Last edited: Mar 31, 2022

Burticus said:
Whats up with that funky keyboard, Peter?

And yeah, take that thing out into the alley and set it on fire. Viking funeral!
Click to expand...

The mouse and keyboard were an idea I was messing with years ago with another laptop that had an 18.4" screen. It was big enough that I could push back and use them instead and still see the screen. Both are BT and the keyboard is solar. I'm planning on replacing both at some point but just haven't found what I'm really looking for yet, but that ASUS keyboard I did a post a couple of weeks back looks promising. For the most part, the whole setup is Bluetooth: keyboard, mouse, controller, printer, and speakers. Once the new desk is setup(btw it got delivered today and I went home and put it in the house) I'll do some real cable management for all the power cables so it's going to look a lot different.

Well, finally got it put together yesterday. I recommend that if anyone gets one of these to change one of the steps in the instructions. Assemble the shelving side before attaching to rest of the desk frame. I'm pretty sure that was what some reviewers on Newegg were talking about. The shelving frame is welded and when you try to insert the shelves it's a bit too tight. With a little muscle I was able to force it but it was tricky to get the mounting holes to align. Something else to note is that it is possible to reverse the frame(but you have to do it before mounting the shelves) which allows you to put in on the left side instead of the right. This was handy for me because it allows me to keep my chair closer to the wall which adds some space in the room when I'm not using the desk. 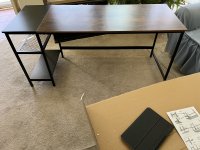 Here's it the room. I'll still have to do some power cable management but even then it's better than it was. The desk space is awesome though. 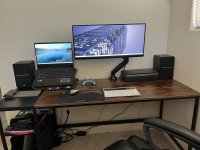 Me thinks you need one of these https://www.reddit.com/r/Corsair/comments/tttpn6

My IKEA counter-top desks are still going strong, though they did cost a little more than this thing.

If I could I would get desks that are even a little larger. The size I wound up with was 74x25 5/8". I wish it were both wider and deeper, but this will have to do because it is what I can get.

They have a 98" version as well, but it is still the same depth (presumably due to standard counter-top sizes)

85"x39" would probably be about perfect.

Yeah, it's really amazing how high the prices go if you want a larger desk these days.