What is on your PC Gaming plate right now?

Brian_B said:
So, got Hammerting in a Humble Choice pack this month, decided to try it.
Click to expand...

Yeah I just claimed that one from HB too... into the infinite backlog it goes

Big *** Dragon event in ESO for a few days

The Ascent - I have about 10 hours into it so far.

Has that cyberpunk vibe going on with it. Reminds me a bit of Warhammer 40K Inquisitor in terms of art/style - plays closer to a twin stick shooter than Diablo clone though - that reminds me heavily of an older Source title called Alien Swarm. It even supports 4-player multiplayer like Alien Swarm.

Anyway, it has some RTX tricks - raytracing and DLSS. I do have a GPU that can turn those on, but honestly, I can't tell the difference while playing. DLSS gives a decent framerate boost without any noticeable effect on graphics. I can't tell what RT is doing really while playing, other than it eats the frame rate alive. I don't know if that's an indictment of Raytracing, or just that the unreal engine looks pretty darn good without needing it.

I did find this, which can probably do more justice than I can with respect to screenshots for comparison. 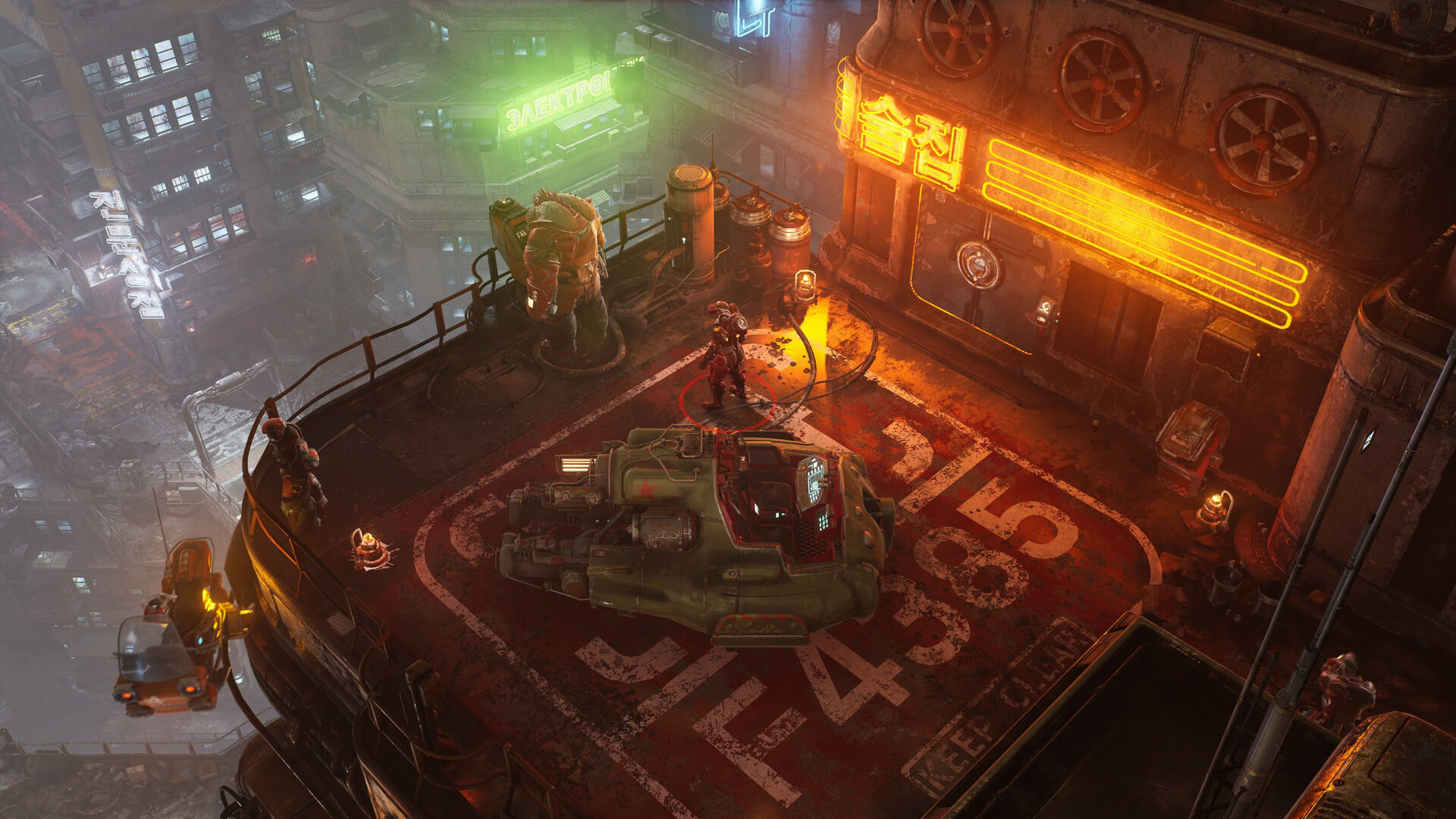 Powered by Unreal Engine 4, The Ascent supports both Ray Tracing and NVIDIA's DLSS. As such, we've decided to benchmark them.

Interesting options to play with anyway.

The game is decent. I do complain that it oversaturates the lighting, by a lot. You have no control over camera angle and the game pans it around for you - mostly decent, but still not as good as manual. The gameplay suffers some pacing issues. Some tasks are given out of order or with insufficient direction. Your power level seems to jump in fits and bursts. You can easily wander into very dangerous territory inadvertently (I see this as a positive). Somehow, even though your in a giant enclosed arcology, it still rains most of the time.

But once you get into the groove, the game grows on you, and the world environment is stunning at times. The music melds right in. The game tells more of a story through it's environment than it does your character, dialog or quests -- as you move up in the arcology the glass floors let you see all the little people you've left down below, and the game makes you go back down there on occasion so you remember where you came from. The game forces you to use tactics, and the combat is visceral and at times frantic. You can't just spam buttons and win, and at no point did I feel either stuck due to being underpowered, or overpowered to the point where the game was a pushover. I feel sorry for all the innocent bystanders that get caught in the crossfire - of which there are a lot.
Last edited: Aug 1, 2021

Been playing some Rust a lot lately. Setup a server (mostly empty) where my cousin and I goof around on it. Been playing around with different plugins on the server to get a good balance. If I'm not working or on my Switch, then I am playing Rust haha

Just finished Terminator Resistance, next up: The Ascent.

I just got Old World, on sale on EGS. Weird spin on Civ and Cursader kings. I kind of like it, but haven't decided yet. And my stupid kids keep dying off.
Last edited: Sep 11, 2021

Zone of the Enders

Just started Guardians of the Galaxy, and finishing Crysis 2 + 3 remasters. Considering replays of SOTR and ROTR. Once again I've gotten about 1/4-1/2 way into Control and got bored. RDR2 is still on the back burner but I've still got interest in going back to it since DLSS has made it much more playable at 4K. Might do another playthrough of Metro Exodus soon.

Got the full version of Forza Horizon 5 and have been deep dived into that one since the 5th. I'm a nut for racing games so I'm not surprised.

Grimlakin said:
Got the full version of Forza Horizon 5 and have been deep dived into that one since the 5th. I'm a nut for racing games so I'm not surprised.
Click to expand...

I haven't gotten back into them since GT A-Spec but did dabble a bit with Dirt Rally. I've personally known some people from racing. From mechanics(including family with tank trucks) to those who've driven(and been mechanics and raced local NHRA-that I personally use). It's a passion I've somewhat let slip by. I used to offroad quite a bit in the 90s and early 2000s. At one point I put almost as many miles on my customized 93' 4-cyl Toyota as many of on-road, most of which I personally did modify under mentorship from experts by hand. At one point the odometer broke around 200k(I had bought it with 55k) and I rode it another 2 years after.

Grimlakin said:
Got the full version of Forza Horizon 5 and have been deep dived into that
Click to expand...

Same here, and ended up getting the latest Skyrim Anniversary Edition, so I'll be giving that whirl as well.

Believe it or not I'm taking NFS HS2 for a re-spin, men I loved that game.

Still messing around in shadowlands, trying some new build out in BL3 and getting my *** kicked in apex legends.

Stoly said:
men I loved that game.
Click to expand...

Freudian slip of the day.

Just finished Guardians of the Galaxy yesterday. I had a lot of fun with it. Decent graphics(not always consistent and some parts are far better than others) and performance. The story was pretty awesome and the game is greatly influenced by the comics rather than the movies but does take some cues from them. I'm not saying it's for everyone but I enjoyed it. The in-game soundtrack is a blast. I definitely felt immersed in their universe and came away with a good stand-alone story.

Terminator Resistance is the only thing I've got right now. Although, I'm still enjoying playing the Ghost Recon Breakpoint expansion that came out a couple weeks ago.

I got a deal on Forza 4, I learned the next day, it wasn't 5..... I do like to report, there is no more fun than drunk driving on a sim.
Forza 4 reminds me of Midtown Madness and some of the older Need for Speeds, you know, the good ones.

I would suggest that Meyers Rum, not be used while playing this title.... or any title. It's ook. Every time I took a drink. all I could smell was Sharpie markers.
You must log in or register to reply here.
Share:
Facebook Twitter Reddit WhatsApp Email Share Link
Become a Patron!
Top